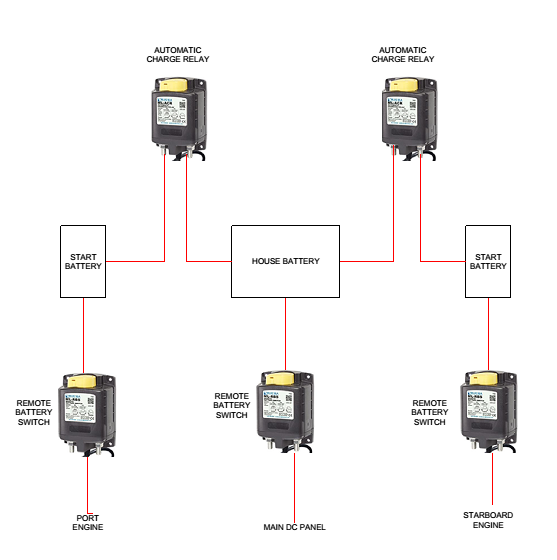 There are many ways to do a layout for multi-engine boats, here is one simple way to do it using remote switches.  This is a greatly simplified drawing that only shows positive wires and omits circuit protection.  The boat has two engines, each with their own starting battery, and a large house battery.  Remote battery switches are used so that the switches can be as near the batteries as possible (as required by ABYC) while also being accessible (also per ABYC).  These two requirements are pretty much mutually exclusive on a larger boat unless remote switches are used. The switches shown have manual lockouts for servicing.  Each load has a switch to its respective battery, and the three battery banks are liked together using Automatic Charge Relays (ACR's)  So when any engine is running and charging its dedicated start battery the ACR's will combine and send the charge to all the batteries.  As soon as the engine is stopped or the charge source goes away the ACR's will separate and each battery will be on its own.  In the event that a start battery is a bit flat the ACR's can be forced into a manual override combined position to allow starting from all the batteries combined.
In this system charging is allowed between batteries even if the load of the battery is switched off.  So for example if the port engine were disabled and turned off for some reason its battery would still get charged from the starboard engine.
In the layout shown here (for a 12 volt boat) the remote switches are Blue Sea Systems 7700  ML-Solenoids rated at 500 Amps and the ACR's are Blue Sea Systems 7622 ML-ACR  Each switch or ACR comes with a remote switch, and for this layout you would end up with a total of five remote switches.  Each remote switch has an indicator light to show the status of its operation.and the ON-OFF switches have lockouts so you cant accidentally turn one off and fry an alternator.  Here is what a set of three switches would look like if mounted on a 360-Series panel: 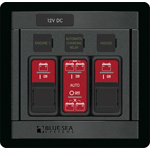 You would probably end up putting the three battery switches in a row and then on a second panel the two ACR's and a blank.  A blank panel to mount three switches is available and is part number 1520

If you are designing a new custom 360-Series panel these switches can be easily accommodated and below is just an example of what it might look like: 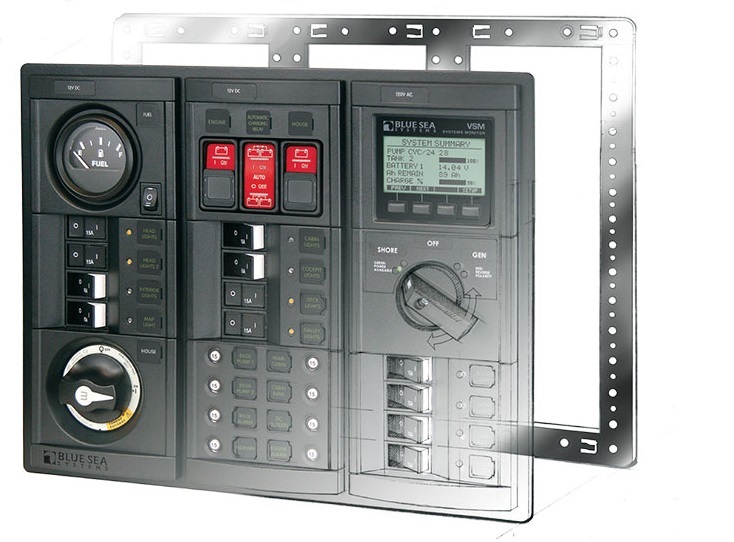 Hi Peter, I have 2 engines that I want to start on the same starter battery but have my alternators feed both the starter and a 675AH bank for the house. What would you suggest for charging both banks while making sure that both engine positives are completely isolated from each other? Could I just put an ML-ACR Automatic Charging Relay in the system? I have a house switch, a port starter switch, a starboard starter switch and a parelleling switch... Thanks for any advice before I go ahead an place an order.

Thank you for this post. I have a few questions though. I have a 44' catamaran sail boat with 2 volvo penta 40HP engines. One engine has a dedicated lead acid start battery, and the other a lead acid battery bank that doubles as a start battery and a house bank for the boats 12v system. The manufacture provided a manual switch so either engine can be started off the others starting battery in emergency, but only in isolation. This means running only one engine, which I frequently do, wont charge the house bank. I want to add a larger Lithium battery house bank and trim the second engines battery bank down to just a starting battery. I also want to setup ACR's so running one, or the other, or both engines will charge the house bank when their starting batteries are charged appropriately. I dont understand what the remote battery switches are in this scenario. I am guessing my engines and starting batteries don't merit these?? Please let me know what ACR you recommend for my situation, and if I need or should have 2. Also, please tell me if the ACR can be set to charge a Lithium bank without having to modify the alternators on my engines. Thank you, Nick Polazkowyj

These kind of ACR's dont work very well with Lithium Batteries. The voltage of the Lithium battery is pretty constant and when it is on charge it only goes up marginally. This means that the ACR doesnt get the signal it needs to combine or separate. Its quite likely that the combiner would stay combined all the time. If you have Lithium batteries with an external BMS (Battery Management System) then you can get a more sophisticated ACR that works on the command of the BMS. In that scenario there are two conditions that need to be fulfilled for the ACR to combine. 1. The Lithium battery has to be able to accept a charge and 2. The source voltage must be higher than the Lithium battery voltage. The Victron Lithium batteries that we sell do have an external BMS and we use the Cyrix-Li-Ct in this case as the ACR.

I have a dual battery two outboard system with a single battery switch. Outboard Positives to the switch, negatives directly to either battery with a crossover on both negatives. Works like a charm. All the diagrams I see have two battery switchs. Why?

There are a lot of different ways of doing it and there is no one right way. The goal is to always have a battery charged up and available to start the engine. Having more than one battery means one can be reserved for starting When I wrote this article I had bigger boats in mind where each engine would have its own starting battery and there was a separate house battery.

Thank you for this suitable article about Battery layout for twin engine boats b 36, it will help me and people like me looking for the same. I appreciate your effort for taking time to do your research and present these details before us. Really nice way to present this content, very appreciative!!