I ran this calculation for a real project.  It is based on a requirement of 300 Amp Hours of useable capacity.  The aim is to compare the cost of an AGM system and a Victron Lithium Ion system.  I am rounding my numbers off for clarity.  The prices are based on December 2017 going rates.

To get 300 useable amp hours capacity with AGM batteries and have a reasonable life expectancy requires us to use 600 amp hours of batteries.  This is because their life expectancy drops off seriously when discharged more than 50%.  A 4D Lifeline costs about $530 and has a capacity of 210 amp hours so three of them costs a total of $1590 and when divided by the 1000 cycle life expectancy gives us a per cycle cost of $1.59   The weight of the battery bank would be 372 Lbs

The Lithium batteries have some incidental costs of control equipment, normally in the region of $250-500.  Both battery systems could use monitoring equipment, inverters, and all the other parts that go with batteries.

Its a bit harder to quantify the performance premium associated with Lithium batteries.  The weight will be from 50-75% of a comparable AGM bank and the Volume reduction is comparable also.  Speed of charge and discharge if vastly increased, the voltage output of Lithium when used as described will always be 12.5 volts or above.

Victron energy wrote their own Blog Post about the same subject. Here is the link:  Lithium Ion vs AGM

Here is some background information

The life expectancy of an AGM battery depends on how deeply it is discharged. The definition of an empty battery for an AGM is when it has reached 10.5 volts.  Since this isn't a useful voltage to run sensitive equipment a more meaningful number might be when the battery gets down to 12 volts, which would be 60% discharge.  I took this from the Lifeline Battery Technical Manual and used the 20 hour discharge rate as shown in the table below. 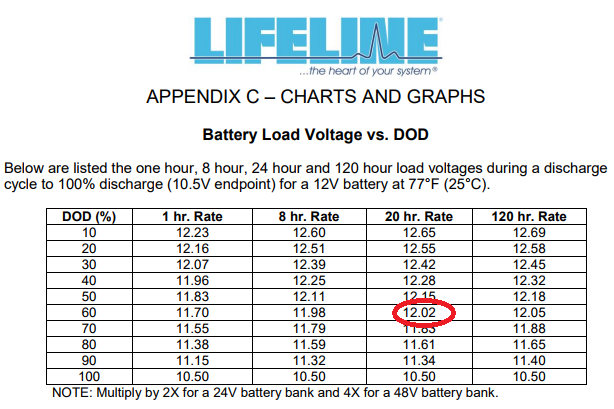 Part of the comparison involves comparing the life of the batteries.  Below is the table of cycle expectancy versus depth of discharge for Lifeline batteries: 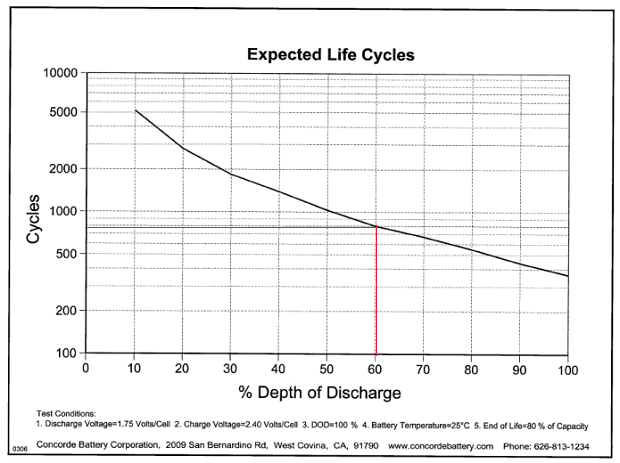