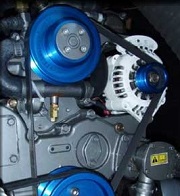 Posted by Peter Kennedy on 4/13/2015 to Alternators
The boat was a Beneteau 50 and I was installing a 150 Amp Balmar 6 series alternator on this Yanmar 4JH4-HTE and as 150 Amps was more power than could be transferred by the standard single belt I opted to install the Balmar/Altmount serpentine pulley kit. The kit consists of a serpentine pulley that goes over the main crankshaft pulley, another serpentine pulley that replaces the water pump pulley, and a matching pulley on the alternator itself.
My first surprise was that this engine has a guard that covers all the moving parts at the front. This was easily removed with three nuts, but it did cause me some time figuring out if it would be able to go back on over the new pulleys.(it did go back at the end)
This is a view of the engine showing the original pulley arrangement.  The water pump pulley is at the top and the crankshaft pulley on the bottom.  The water pump pulley is going to be replaced, the crankshaft pulley is going to have a new one go over the top which will be fastened in place using the three unused bolt holes you can see in the picture above.
I started by loosening the old belt and removing it. In retrospect it would have been better if I had left it on for a bit longer as when you try to undo the bolts holding the water pump pulley it spins making it hard to work with. If I had left the belt on it would have immobilized the pulley while I cracked the bolts loose. Balmar recommend using an impact wrench to loosen those bolts but not having one to hand I figured out how to do it anyway. Next time I will leave the belt on. In my workshop earlier I put the pulley on the alternator myself and that does require an impact wrench. Normally it would be delivered already mounted so that shouldn't be a problem for most installations, ( an impact wrench spins the nut so fast that it comes off before the pulley can get up any speed) 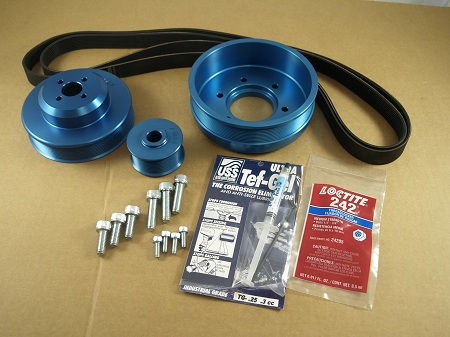 The kit is available for purchase here at the store and comes with everything you need to complete the job, including the pulleys, fasteners, locktite and corrosion eliminator, and a belt plus a spare. These belts are 10 groove belts and as they are not universally available it pays to always carry a spare. Kits are available for  Yanmar 6L, 4JH, 3JH, 3GM, 3HM, 3YM, and 2 YM engines.  Also Westerbeke, Universal, Perkins, Volvo and Nanni engines, more kits are being added every day so check back or call.
Putting the new pulley over the crankshaft pulley was a piece of cake. Balmar supply some compound to smear over the original pulley so that the steel of the original and the aluminum of the new one dont eat away at each other. The new one just pops over the existing and there are three bolts to tighten up. Some Locktite is supplied to make the bolts vibration resistant, just a dab on the threads is all that is needed. It wasn't difficult to tighten up the crankshaft pulley as the compression of the engine stopped it from spinning freely.
Putting the water pump pulley on was almost as easy. The fact that it was free spinning made it a little harder, and first time around I forgot to replace the face washer and so had to undo the nuts to put that on. Again metal to metal contact gets some sealant where aluminum would come in contact with steel, and the nuts get locktite so they wont vibrate loose.
Mounting of the alternator was easy on this engine because there was more room that on some, but the process is the same in every case. I did a dry fit first to make sure everything was going to work out. There was a spacer on the old alternator that had to get transferred to the new one. After the dry fit I do all the wiring as it is easier to work on the alternator when it isn't in its final position. For the final fit the bolt has to tighten up so that the alternator is snug, there is no wobble and when that is achieved it should end up being all in alignment.
This photo shows the old and the new alternator side by side.  The spacer on the old one will be removed and installed on the new one.  Make sure your new alternator has the right bushings to suit the diameter of the mounting bolt so there is no wobble when it is all tightened up.
I'm not going to talk about wiring here, I have another blog post covering the alternator installation in more detail. The bottom line on the serpentine installation is that it was easy, went very smoothly, and despite some initial apprehension it worked out extremely well.
Here is the finished result, with the engine running.  Its purring away, no trouble transferring the power.  This really is an awesome solution to a problem that has caused trouble for as long as I have been working on boats. Well done Balmar and Altmount.
Share |
Previous Post
Next Post

Nice write up. Wonder if you could help me out? My boat is 1/2 a world away(in Thailand - me in FL). I'd like to take a serpentine kit over with me (Shipping sometimes "gets lost") when I return. Could you tell me the clearance on a 4JH-HTE kit? Like what is the Inside Diameter of the crankshaft serpentine pulley? Your build shows nice views of the front side - but is the fit close - or is there some room for variation? Also I'd like to add another pulley to the outside for a second alternator - or watermaker (on electric clutch), so I'd also like the OD of the pulley as well. Can't tell from the photos if the water pump is grooved - or smooth. Does that make a difference? Thanks in advance. Cheers - Jim

Looking to do the same on my Yanmar 4JH2 TE with a Balmar AT-165 but wondering if the side load on the water pump will be too high. I've been told the serpentine belt allows lower tension (than existing v-belt) and therefore eliminates the water pump side load and potential bearing issues. Any real experience on this?

Thanks for the comments. Please put specific questions to me in an email so they can be answered more thoroughly and more promptly. The water pump pulley is grooved too and yes, this kit does allow you to have less belt tension while still getting adequate traction. This is because of the superior grip of the 10 groove belt. There have been a few variations of this engine to do with the placement of the water pump. There is an idler pulley available to deflect the belt in certain circumstances - if you think this applies to you please ask in an email.

HAve a new 2203 Nanni block marinized. Have an originial naninni alternator and and old reconditioned 7" Leece Neville 4800 alternator. On a prior similar block used both alternators with belts. Too much dust in engine compartment. Question: what p;arts do you hav for mount these two alternators on my block (50o HP 2203 Kubota?)