Inverter Specifications: The difference between VA and Watts

Posted by Peter Kennedy on 11/30/2018 to Victron MultiPlus and Quatro
In inverter specifications VA refers to Volts x Amps.  Volts x Amps is the electrical formula that gives you Watts. Since Watts = Volts x Amps the terms Watts and VA should be interchangeable right?
"Not quite" is the answer.
When the load is a resistive load like a heater Watts and VA are interchangeable.  When the load is an inductive load like a motor it gets more complicated. The explanation is a rather complex electrical concept called Power Factor, but in simplified form it goes something like this:
With inductive loads the load itself reacts with the power source.  With each cycle of current a magnetic field is set up within the motor coil windings.  As the magnetic field starts up there is an inrush of current, once the field is established nothing much happens, and then at the end of the cycle there is an outrush of current.  The effect has a time lag and the outrush of current fights the incoming current for the next cycle and thus reduces the total amount of power available to do the work.  This effect is called Power Factor and can be defined as the ratio of the real power absorbed by the load and available to do work to the apparent power flowing in the circuit. With a typical inductive load the Power Factor might be in the region of 0.8
The Power Factor effect means that with resistive loads the formula Watts = Volts x Amps is true but with inductive loads the Watts is a lesser amount, Volts x Amps x Power Factor.  That's why you will see inverter manufacturers quote their rated output in VA - its because it is the higher number and so looks better on the spec sheet.  Everybody does it.  If your inverter is running a toaster or a coffee maker it doesn't matter but if you are running a vacuum cleaner or power tools it does and you need to be looking at the Watts figure.
The rated output for our most popular inverter charger, the Victron MultiPlus 12/3000 is 3000 VA but for inductive loads it is rated at 2400 Watts.  This represents a Power Factor of 0.8 since 3000 VA x 0.8 = 2400 Watts 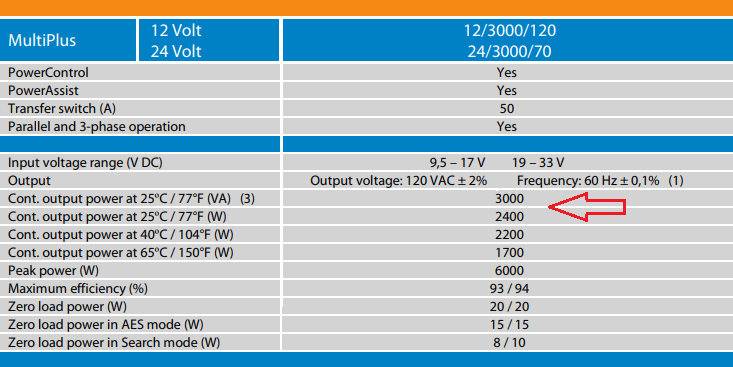 This is a complicated subject that I have greatly simplified, if you want to delve a bit further this Wikipedia article on Power Factor will get you started.  Please feel free to add your bit in the comments below.
Share |
Previous Post
Next Post

Best article which i found after hours of search about this.

I agree with Aadesh, to the layman this is a complicated subject and Peter has put this in perspective for me. I'm looking at Victron Multiplus so the example the Peter gave was perfect. People at boating, battery and solar retail supply stores can't explain the difference, they need to get educated if they want to sell this stuff.

Stating values as examples makes all the difference. I know the math is difficult but since you gave a basic value of .8 as a power factor in the example it made it clear to me. Thanks!

I wish I had read this article before buying my inverter. It now makes sense thank you.