Posted by Peter Kennedy on 4/6/2020 to Battery Combiners 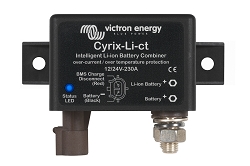 The Cyrix Battery Combiner is a microprocessor controlled heavy duty relay that automatically connects batteries in parallel when one of them has reached a pre-set voltage (indicating that the battery is being charged), and disconnects when the voltage decreases below float level (indicating that one or more batteries are being discharged). Cyrix Battery Combiners are an excellent replacement for diode isolators. The main feature is that there is virtually no voltage loss so that the output voltage of alternators or battery chargers does not need to be increased.
There are a number of variations that cause lots of confusion so I wrote up the list below to try and explain the differences between the different models:

These are conventional battery combiners for 12 or 24 volt conventional lead acid, agm or gel batteries.  They automatically sense system voltage and so self adjust for 12 or 24 volt systems. The Cyrix-Ct has bi-directional smart sensing and will combine if it detects that either battery is being charged.  It will use the trend of the voltage sensed as well as the actual voltage to determine when to combine.  The Cyrix has provision to install a manual override push button that will force a combine for 30 seconds so that both batteries can be combined for the purpose of starting an engine that is being difficult to start.  Available in 120 Amp and 230 Amp versions

These are a modified version of the Cyrix-Ct for use with Lithium batteries that have an external BMS.  It allows the BMS to control the Cyrix in such a way that it will not allow the Cyrix to combine unless the "Allow to charge" signal is received from the BMS.  It doesn't really make clear in the instructions but my understanding is that this does not have bi-directional sensing.  In other words it will combine when the conventional lead acid starter battery is on charge  so some of the charge can go to the lithium battery but it won't work the other way around to charge the start battery from the lithium battery.  The Cyrix-Li-Ct does not have a manual override button.  Available in 120 Amp and 230 Amp versions

The Cyrix Li-Load is a relay that goes between a Lithium battery fitted with an external BMS and a load.  It is controlled by the BMS "allow to discharge" wire and will stay on all the time that the "allow to discharge" is in an on state.  This is the same function as the Victron Battery Protect.  Works for 12 or 24 volt systems and auto senses which system is in use.  After three successive shut downs it won't restart until it senses that the battery is on charge.

This goes between a battery charger and a Lithium battery fitted with an external BMS.  It will allow charging as long as the BMS "allow to charge" signal is active.

This is a conventional battery combiner for lead acid, agm or gel batteries.  It has a higher 400 amp rating.  We don't sell a lot of these, the relay is not in a sealed enclosure and it limits its usefulness because it makes it prone to ingress from dust or water.  We have other options from other brands that do this better, such as the Blue Sea ML range of 500 Amp relays.
Share |
Previous Post
Next Post

I believe the Li-CT does have a manual override. If you ground pin 86 on the plug twice it will engage for 30 seconds for start assist.

I have the CT model and understand (for now) the Li version only has higher thresholds for Lithium. Is there a time the system will not accept the 25 Amp demand from the alternator to the back lithium or will it always run at 300 Watts (it varies some)... I just installed this and started the van and it shows charging and I can sorta hear the alternator. I have a Victron solar 71/15 ready and operational with a 100 W panel that keeps the lithium coach charged.. but on cloudy times etc. I put in the alternator charging. I have another vehicle that is a Victron Dc to Dc charger but didn't do that on this rig. Again, I just don't want the alternator constantly putting 300W to a battery that might already be charge and rely on the BMS to protect for over current ... 100% o the time.

How much current flows is determined by the relative voltages, wiring and resistance of the two connected systems.